We are a Brazilian broadband internet service provider (“data”), with a history of high growth, being a market share leader in each of the broadband markets in which we operate. We target the residential and B2B (business-to-business) markets, with presence in 26 small and medium-sized counties in three large geographical clusters in the states of Ceará, Rio Grande do Norte, Paraíba and Bahia, in the Northeast of Brazil, and in the country side of the states of São Paulo and Minas Gerais, in the Southeast.

In March 2015 we started our activities as a result of the acquisition of Cabo Telecom, the broadband acess provider which is the top 1 in subscribers of Natal city in Rio Grande do Norte, followed by the acquisition of Videomar on July 2015, one of the largest broadband providers in Fortaleza (Ceará). Between 2016 and 2017, we focused on organic expansion in Rio Grande do Norte/Paraíba and Ceará’s clusters and on the integration of the entire operation. During this period, we expanded our network with infrastructure focused on fiber-to-the-home (“FTTH”) to the regions adjacent to the cities of Natal and Fortaleza.

In 2018, in order to expand our business, we invested in the development of greenfield projects in João Pessoa. The development of greenfield projects is one of the main drivers of our organic growth, which has already mapped 84 new regions, which in total represent an additional addressable market of 2.8 million subscribers. Also in 2018, we acquired four new targets: “Tecnet” (Fortaleza), “Conexão” and “Alegra” (interior of São Paulo) and “Direta” (interior of MG). With these acquisitions, we established our regional presence within the states of São Paulo and Minas Gerais, as well as in the Greater Fortaleza market.

Below, the map shows our network and regional presence: 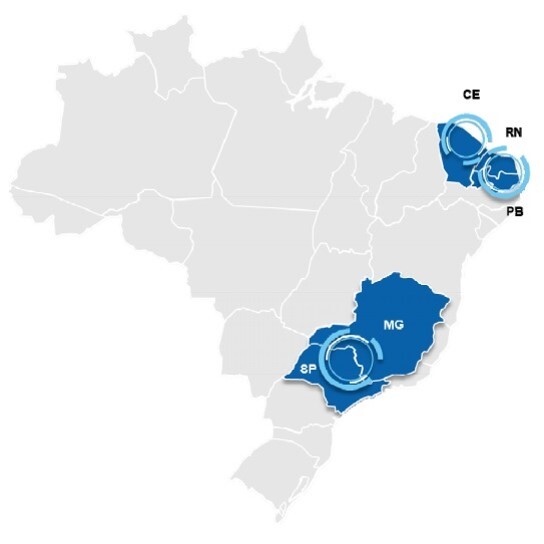 Between 2017 and 2019, based on organic and inorganic initiatives, we delivered a 42% increase in homes passed per year, substantially 4%¹ higher than the average for global players.

As of June 30, 2020, we were active in more than 28 cities in 5 Brazilian states, with approximately 330 thousand subscribers, of which 15,384 thousand were corporate customers and more than 7.4 thousand kilometers of fiber optic cables.